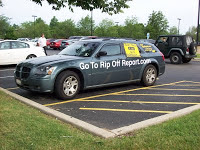 Wayne Beto, 76, passed away this afternoon. Remember Wayne - of the David & Goliath battle in Crystal Lake in front of the old Viking Dodge?

I met Wayne one day, when I passed his parked car with all those signs taped onto it, where it was parked in "Wayne's Spot" on U.S. 14 in Crystal Lake, just east of IL 176. You know the spot. IDOT ought to put up an historic marker on that patch of shoulder.

Wayne had a beef with Viking Dodge, and he just wouldn't let it go. He was right, you know. He told me the story. I told him and others often, if Viking Dodge had just apologized, it would have been all over. On one hot July day when he was carrying his sign and picketing right in front of the dealership, had they brought out a couple of lawn chairs, a beach umbrella and a cooler with a few bottles of cold water or soda, that would have been the last they would have seen of him.

But Wayne was tough. And the rougher they wanted to play, the more resolute he became.

It was a pleasure to know Wayne. I visited him often at his Marengo home, where he lived with his son, daughter-in-law and grandson. Wayne was honest, strong and cheerful. He cared about others. I don't think we ever had a conversation when he didn't ask me how my stepson was doing.

Wayne was ready to go. We had some fine conversations during the past few weeks, and I feel privileged that Wayne and I were friends. Godspeed, Wayne. You're free now.

Have you written yours in advance? DOH!

Working on it, TMB. I'm waiting to find out if my statute goes in front of the courthouse or in the back.

Tho you're deserved of Granite or Bronze, if it goes in front of Castle Nygren, he'll insist it be made of paper mache'!!! DOH!

Hope they spell my name correctly. It's Philpott, not Piñata.