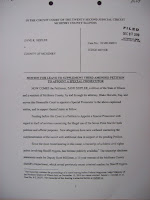 On Monday, December 27, 2010, a Motion for Leave was filed in McHenry County Circuit Court involving Keith Nygren as Sheriff of McHenry County (Ill.). The Motion by Blake Horwitz, Esq., attorney for Zane Seipler, requests a Special Prosecutor be appointed to investigate "allegations of criminal wrongdoing by Sheriff Nygren". (Click on the images to enlarge them; then click on the Back button on your browser to come back here.)

Statements of Deputy Scott Milliman, until recently an on-duty Deputy Sheriff of the McHenry County Sheriff's Department, who is referred to in a hearing in U.S. Federal Court in Rockford on December 15, are the basis for the motion. The Motion includes the following:

"The transcript also reveals that Sheriff Nygren was observed to have committed and/or participated in the following: 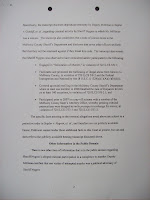 "Covered up racial profiling in the McHenry County Sheriff's Department where at least one member in 2008 falsified the race of Hispanics drivers on at least 140 occasions, in violation of 720 ILCS 5/8-2.1; and

"Participated prior to 2007 in a pay-off scheme with a member of the McHenry County State's Attorney office, whereby pending criminal prosecutions were dropped as nolle prosequi in exchange for money, in violation of 720 ILCS 5/33-1 and 720 ILCS 5/33-2." 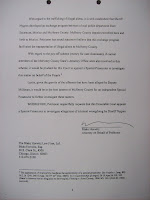 Also, stated on Page 2 of the Motion is the following:

"There is one other item of information that is in the public domain regarding Sheriff Nygren's alleged criminal participation in a conspiracy to murder: Deputy Milliman testified that one victim of attempted murder was a political adversary of Sheriff Nygren."

Whne is the County Board or State's Attorney Bianchi going to get involved? Bianchi is already on the way out. You think he would try to keep his head above water and address these issues so not to let everyone in McHenry County think he is a lame duck.