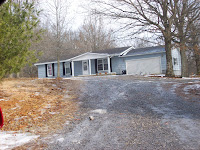 It was 30 weeks ago that Beth Bentley was last seen in Mt. Vernon, Ill. Somebody (or some people) know where she is or what happened to her.
Thirty weeks is a long time to keep a mouth shut. It's a long time, if more than one person knows what happened, for them to keep their stories straight.
Police investigators are pretty good about spotting inconsistencies in stories, when they are re-told.
Pictured is the house where Beth may have stayed in rural Mt. Vernon, Ill. after she arrived there early on Friday morning, May 21, after Jennifer Wyatt and she drove from Woodstock, reportedly in a rental car. Did she go back there after drinks and food at the Frosty Mug?
This may have been the last place where she was seen. If only houses could talk.
So far as I know, there are two Crime Stoppers rewards, each "up to $1,000", and a separate $3,000 reward fund, although the person(s) offering it has never been identified, nor have the terms of that reward ever been made public. Is it for information that leads to the arrest of anyone involved in her disappearance, or is it for information that leads to finding her?
And is that $3,000 reward still available or in effect? Does anyone know?
Posted by Gus at 12:30 PM