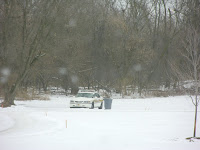 I wonder who you have to be in McHenry County to gain the privilege of having a marked Sheriff's Department squad car parked in your driveway for days at a time. I'm not talking about a take-home squad car driven by a deputy.

If you drive by 7002 Foxfire Dr., in unincorporated McHenry County just outside the city limits of Crystal Lake, you can see this squad car. For a better view of the squad car, click on the image; then click on the Back button on your browser to come back here.

Is the parking lot at the sheriff's department full? Is this squad car parked out of sight of anyone on the County Board who might wish to count bumpers before approving the purchase of 10-16 new squad cars?

The owner of this property, according to the website of the County Treasurer, is Kathleen M. Goode. Now, I don't know Ms. Goode, but I wonder if she might be related to the Brian Goode who is a member of the McHenry County Sheriff's Department Merit Commission. Mr. Goode was appointed to the Commission in August 2002. He is one of two of the five members of the Commission who has no profile on the Merit Commission's webpage at www.co.mchenry.il.us/departments/sheriff/Pages/MComm.aspx
Another blog in McHenry County reported a few months ago that donations to Sheriff Nygren's political campaign from persons named Goode (or businesses connected to the Goode name) have exceeded $50,000 in the past ten years.
Would anyone else in McHenry County like a squad car to park in your driveway? I don't know if you have to fill out an application or just call in your order.
Posted by Gus at 11:31 PM

If you have enough money to contribute, you can have the Sheriff park a deterrant squad on your drive.