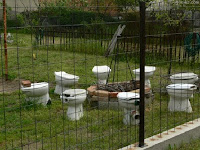 Having been a not-so-proud tenant of a landlord in Forest Park back in 1968 who thought it attractive to install a bathtub as a backyard planter, I had some sympathy for Asmus. Her fixtures were not the junk to which Judge Michael Caldwell referred in his ruling.

The Village had better head over to Gold's Gym if it's going to flex its muscles over such trivial matters in the future.

And in this morning's email, what arrived? An idea (see photo) for summer parties in the Asmus yard. Tina, are you reading?
Oh, and don't miss the comment by "Tricia3", who got in the last word to the Northwest Herald article, when she wrote her comment on December 16, 2010 11:30 p.m.

"This woman is a nut. She doesn't want to pay to have the things removed so she resorts to this? Has any of her neighbors thought about paying those toilets a late night visit with a sledge hammer?"
Duh, is this a threat or not? Asmus ought to sic Attorney Kililis on Tricia3. He could break through the UserName and force the Northwest Herald to reveal the identity of "Tricia3". Now there's a legal fund to which I would contribute!
Wasn't the Northwest Herald reporter kind to omit the name of the legal counsel for the Village of Lakemoor who pursued that stupid ticket?
Posted by Gus at 7:04 AM