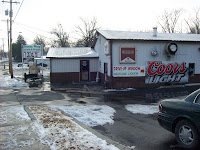 Yesterday I was in Mt. Vernon, Ill. to see what kind of place The Frosty Mug is. Now I know.
As I drove toward it, I thought about a burger for lunch (with a cold beer, but I still had 300 miles to drive, so that was out) but, after pulling into the parking lot, I had second thoughts. I may have missed a good burger; the parking lot was full.
But Woodstock doesn't even have a place that begins to look like the Mug. Thankfully. Was this the place where Beth had her last dinner?
Before getting there, I had an image in my mind of a place maybe like Coleman's. But The Mug is just a small town watering hole. If the exterior says anything about the crowd that would hang out there on an early summer night, there was a fair amount of drinking going on. Maybe other entertainment.
Other customers saw Beth in that place, and they saw the people she was with. It's the kind of place where an outsider would be noticed. And if she was there with locals, which has been intimated, then the regulars would have razzed the locals over the following days, asking questions about Beth and Jenn.
I did hear a very interesting comment in town about who should have gone under the microscope in this case. But 300 miles between Mt. Vernon and Woodstock could mean that the same level of scrutiny might not be applied.
Posted by Gus at 7:31 AM

An area resident has this to say about the Frosty Mug: "They say it is very clean and the food is good. They don't allow any trouble either. You never hear of fights and the such from there."

I do not know who you spoke with in this area but i agree with them about there being no problems at the mug. I live about a block south of there and the pd is at my apt complex more than they are at the mug.

Gus i do not know who you spoke with in the area but I have to agree with them as I live just a block south of the Mug. The PD is at my apartment complex more than it is down there and they are not her very often.

Just proves to me, once again, that I shouldn't judge a book by its cover.