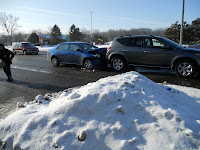 Reason #1 for allowing a safe distance between you and the car in front of you when stopping was clearly demonstrated again this morning in Woodstock.
A six-car pile-up occurred in front of the Citgo station just north of Burger King about 9:30AM. Car #2 (pictured), numbered from the back of the crash, appeared to be the most heavily damaged. It appeared to have been rear-ended and pushed into the car ahead of it, which then must have been pushed into the car ahead of it, etc. Air bags, including side airbags, deployed. (Click on the image to enlarge it; then click on the Back button on your browser to come back here.)
The two Woodstock PD officers were busy, but I overheard one asking a driver if she wanted to be transported for medical care. Within a few minutes a paramedic vehicle and a fire truck responded, along with wreckers. Firemen were helping out with brooms to sweep up debris from the street, which would have been re-opening of the northbound lane sooner, since the tow truck operators were busy loading cars.
Why would the driver of car No. 1 fail to stop in a 35MPH zone and hit Car No. 2 so hard, pushing it into the car in front of it and involving three more vehicles in front of that one? Did Car No. 6 stopped abruptly to allow a driver to enter or leave the Citgo station? Did other rear-enders happen before Car No. 1 hit No. 2?
No doubt the police will get it all figured out. Perhaps a Northwest Herald reporter will be able to get the full story for an online story later today or a print-edition story on Thursday morning.
Posted by Gus at 10:20 AM