The first Northwest Herald online article gave the ages as 16 for both Alec Kaiser and Jacob Norys, who died in the crash. Aside from the question of why two 16-year-olds were out at 2:00AM, where were they before the crash? Were they at a party? Where was the party? How many were there? 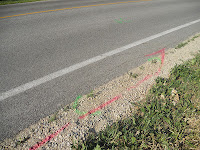 If there was a chase, where did it start? And why? Was the pursuit authorized by a supervisor? At any point did the officer (or deputy) think that high speeds on westbound Davis Road were more dangerous than catching a driver? Had the officer gotten close enough to ID the car?

Davis Road is a "roller-coaster" road with a 45MPH speed limit. Sight distances are limited. If a car is tearing along at night, the driver will lose sight of the roadway below the headlights as he tops a hill. If speed is higher than 45MPH (say, 60MPH or higher), an inexperienced driver might tend to steer a little to the right.

There is a tire track on the right shoulder just off the pavement. If that track is from this wreck, the driver would have corrected to the left. As the car went to the left, skid marks begin in the middle of the road and move in the direction of the south shoulder. Beyond that are brush, a tree, bushes and a brick column.

Perhaps no chase was involved. If not, how did the Sheriff's Dept. learn of the crash? Was it called in by an area resident?

If there was a party, was alcohol available at the party? That's an easy conclusion to which to jump. It should quickly be disclaimed, if there was strong parental supervision at the party and no alcohol or drugs. 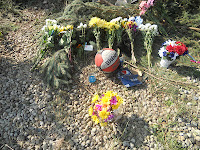 Woodstock High School has an active program to discourage drinking (and drug) use, but how effective is it? I have questioned the effectiveness for several years.

In the June 27 edition of The Woodstock Independent appeared this box ad (public service announcement): "Of those students reporting they had drank (sic) alcohol, 10% of them started before age 10." The source? WCUSD200 2010 IYS Results

What wasn't reported in the small box ad was how large the survey was, how many (and what age-groups) reported drinking alcohol, and what the raw number was for that 10% who started drinking before age 10. What does "drinking" constitute? The definition in the survey is very important.
Posted by Gus at 9:41 AM

Here's another question you should ask.... Why can't you just leave well enough alone? The poor boys haven't even been buried, yet, and you are already questioning them. Why can't you just let the families grieve? Why can't you just let them rest in peace? Do you honestly think they want to think about why the boys were out at 2AM or what they were doing? Do you really think they want those images in their minds? The sister of one of the boys is getting married, soon. Do you think she wants to think about those horrible things, on her wedding day? Gus, be a good person for once and just.... leave it alone.

Just leave it alone. These are two kids with grieving families and you choose to ask these questions? Especially on a website? Who are you to ask these questions? I happen to know both of these families quite well and don't believe they want to hear or see this crap. I understand you have a right to your blog, but I have the same right to tell you to shove it and leave this stuff alone.

JUST IN.....coroner's report shows that there was no drugs or alcohol involved you need to publicly apologize for even insinuating that that was the case. furthermore you have the sensitivity of a rattlesnake you need to learn and know better.

Hey ass wipe, toxicology report came back this morning. Neither boy was under the influence of drugs or alcohol at the time of the crash. So you have successfully just made yourself look like the biggest, most insensitive douche on the face of the planet. I bet your mother is so proud at the fact that you made the grieving families of these two loved boys feel even lower and more helpless than they already were. You can expect a massive crap on your doorstep from yours truly sometime soon. Eat shit, scum bag.

F y I..... the coroner's report was released and it shows that there was no drugs or alcohol involved in the accident. The fact that you insinuated otherwise is despicable. How dare you question the values of the parents. Two young men lost their lives that night leaving many to mourn their passing. They were speeding and there's nothing more to it. You are nothing more than a rattlesnake waiting to spew venom at your unsuspecting victims forcing them to be traumatized even further. You Should be ashamed of yourself. You owe those families a public apology. You should be reporting the news not your opinion. The only person who cares about your opinion is you.

Note: I normally don't publish comments like the one from "Megan Montgomery." Since she displays such nice manners, I'm making an exception.

Dawn, there actually is more to it than "speeding".

Normally, a reader finds news in a newspaper and opinion in a blog.

Okay, here's the news you want. According to the McHenry County Coroner, "Neither case has been closed yet because investigations have not been completed."

Coroner Lantz does not have an estimate of when the cases will be closed. She advises that no inquests will be held. That means there will no public inquest, but I would guess that her office will conduct them "administratively", which allows them to meet in a closed session without the public present. The results, however, will be public record.

It is usually the practice of the Coroner's Office not to release partial information before an investigation is closed. Normally, toxicology reports take several weeks to be completed (possibly 6-8-10-12 weeks).

Late today the Coroner's Office informed me that a hearing was, in fact, held last Friday. Yesterday's information that the cases were still open was erroneous.

Dawn and Megan, I regret that the information you received about the toxicology results was incorrect.

You can call it whatever you want; opinion or otherwise....the key word here is sensitivity.