Sheriff Joe was in town 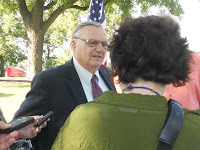 Joe's a pleasant man with a good sense of humor. In his hour-long talk he referred to the people to whom he is accountable, and it was clear that he meant it. Quite refreshing, I must say.

As I arrived, there was a large group of protesters near the entrance road to the Fairgrounds. I rode by and pulled on into the parking area. After settling the bike on the grass parking lot, a golf cart passed, and Joe was aboard. He had been out with the protesters!

He made some of the familiar comments about chain gangs and a women's chain gang, and about controlling the TV viewing menu and serving meals to inmates that cost the jail $0.50/day. Not $0.50/meal; that's $0.50 per day. And he's planning to start charging the inmates for those meals.

He took a poke at President Obama and the national plan of only going after illegal aliens who commit serious crimes. Sheriff Joe's opinion is that, as soon as a person crosses the border and enters the U.S. illegally, he is a criminal!

He gets sued every once in a while, he said. And every time he gets sued, his numbers in the polls go up!

I introduced myself to Joe and told him that, if I'd gotten 50,000 more votes last November, he would have been standing in McHenry County, not in Kendall County.. He told me I ought to run again. I didn't look up Joe's age until after getting home. He was born June 14, 1932, which makes him 79 years old. I never would have guessed it.

Keep up the good work, Joe.

Kendall County Sheriff Randall is very personable, and his deputies were in uniform and looked sharp.
Posted by Gus at 8:38 PM