New Rule for Flags at Half-Staff?

Since this country is going nuts over all the times it lowers the U.S. Flag, including the current lowering because of a terrorist attack in another country, I suggest that the U.S. Flag just fly at half-staff from now on.

The President goes to a baseball game in Cuba, instead of attending to official business, but he doesn't think enough of the U.S. Flag to order it to remain at full staff as a signal to terrorists that nothing they do can force the USA to lower its flag!

Obama will order the flag lowered the next time a dogcatcher sneezes. I say, "No. No. NO. NO!"

Fly the Flag of the United States of America at full-staff - Always. Never lower the Flag.

Change the Flag Code. No politician, bureaucrat, dignitary, foreign official, judge, governor or any one else is important enough to lower the U.S. Flag. Fly it high in their memory.

If I owned a business, I would have a tall flagpole and a huge flag, and I would never lower it!!!
Posted by Gus at 5:14 PM No comments:

Is that guy nuts? He should have been in the air, on the way back to the White House, and paying attention to protecting the U.S.A.

Instead, his family and he go to a baseball game in Cuba. All of a sudden, for the first time in almost eight years, he expresses a concern for normalcy. Please pass the barf bag.

He shouldn't even have been in Cuba in the first place.

Hey, here's an idea. Why not build his presidential library (lower-caps intended) in Havana, right down the street from his new residence on January 21, 2017? And no security, either. After all, he believes people should have guns, so he won't have a thing to worry about.
Posted by Gus at 11:46 AM No comments:

Notice how the media spin the disruptions by the agitators at Trump rallies?

That jerk, Bryan Sanders, who showed up in Tucson and shouted "Liar", should have stayed away. Rallies are for people who support Trump. He went looking for trouble and he found it. How stupid do you have to be to show up and wave a picture of Trump that is overlaid with a Confederate flag?

And then the media blame Trump supporters.

What if I went to a Hillary rally wearing my Trump cap? I don't have any doubt whatsoever that one of her supporters would take a swing at me.

And those who had an American flag on the ground? They ought to get stomped anywhere, by any American.

And Tony Pettway, the guy directed his anger at Sanders? Heck, I'll donate $25 to his legal defense. Where do I send it?
Posted by Gus at 9:15 AM 1 comment: 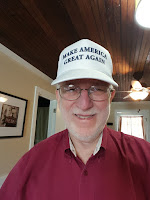 Some women friends are telling me that Trump doesn't like women. I told one yesterday that Trump pays women and men equally for the same work. She was complaining that women earn less than men in the same job. Well, what do I know? Just what I had read in his book.

If a woman is qualified for the job, he'll put her in it and pay her.

The operative word here is "qualified".

My retort was if we capture ISIS' No. 2, we'd have every reason to believe he knows where the next target it, and it's okay with me to use every possible means to extract that information from him (or her). Playing "nice" means we lose.

And another argument was that Trump won't negotiate with world leaders like that nut in North Korea. Of course, Trump will negotiate. But he will be a tough negotiator, unlike Kerry or Obama. 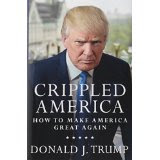 See Trump's book at Arlene's bookstore on the Woodstock Square, Read Between the Lynes. If she doesn't have it, buy it on Amazon. Why should you pay a little more to buy it in person? Because, No. 1, you keep a local business in business! You're going to pay sales tax, anyway, because Amazon is going to send you a notice each year to report your online purchase on your Illinois tax return and pay the sales tax. You do report those purchases; right?

And moving detainees from Guantanamo to South Carolina? How can Obama ignore Federal law, which he even signed? I hate to think what he taught in a Constitutional Law class!

I have a slightly different answer for the tall wall between us and Mexico. Post a Patriot every 25 yards, well stocked with food, water, a long gun and plenty of ammo. Twelve hours on, 12 hours off. We wouldn't even have to make Mexico pay for it.

Make America Great Again!
Posted by Gus at 9:14 AM No comments:

Anyone in need of a good laugh today should read the headline and story on AOLNews that starts with "Obama: Republicans are 'worried and scared' over the looming Supreme Court battle."

Oh, yeah, sure they are. In order, hopefully, to avoid incurring the wrath of the Obama Police, I shall refrain from expressing my true opinion of the Dictator-in-chief and current short-term occupant of the White House.

If the Republicans are smart, there won't be any battle. The name of the nominee for SCOTUS won't even be mentioned very often. To give any nominee of Obama an appointment that could last for 25-30 years would be a huge mistake. Nominee Garland should have "Thanks, but no thanks; I don't need the heartburn."
Posted by Gus at 1:49 PM 4 comments:

An e-mail from Mike Tryon this afternoon informs recipients that polls in McHenry County will remain open until 8:30PM.

So you know what that means.

Mike's message was, "Due to voting machine issues this morning across McHenry County, a judge has ordered that all McHenry County polling places remain open until 8:30PM. Please share this information with your friends."

Maybe Kathie Schultz shouldn't have retired. She had that voting thing down to a well-oiled machine (sort of hate to use that word here).

Tell all your Bernie and Hillary friends that the polls are closing early, and tell all your Republican friends to turn off their TVs and get to the polls.

I've been kidding a Bernie friend here in S.C. that the walls on her home will probably crack after my visit last week. I told her that I had such high respect for her that I left my white "Make America Great Again" cap in my car and didn't wear it into her home. She didn't even give me a hard time about my McHenry County Right to Carry Assn. t-shirt that I haven't worn out yet. Next time, I'll wear my NRA cap, too.
Posted by Gus at 3:39 PM No comments:

When you are being investigated for some pretty serious stuff and you quit, are you really quitting because a better opportunity came along?

With the sudden departure of Matt McNamara from the McHenry County Sheriff's Department, the public will probably never know the whole truth. The first newspaper article (Northwest Herald) made it sound like a voluntary resignation - not under fire.

Then on Thursday just past, it turns out there was a reason. See the Northwest Herald article just this past week. Were any of McNamara's indiscretions crimes, or were they "merely" matters that the Sheriff hoped to handle administratively.

McNamara never should have been hired in the first place. It was good ol' cronyism of the worst sort for Sheriff Bill Prim to hire him and put him immediately in a position of authority. Sure, he had a bunch of paperwork that he could present as "qualifications". He also had a DUI and a nasty bar fight in his background.

And then for Prim to duck at the first news conference and palm the responsibility off on a mouthpiece ... well, in my book that's as bad as anything McNamara did. Prim should have had the guts to make the announcement himself and tell the truth right from the get-go.

This has got to draw into question just about every decision Prim has made. He could take some lessons from Joe Arpaio or Leon Lott or David Clarke.

Prim will ride the $150,000/year gravy train for the rest of his term, but the pols had better start looking for somebody good to run in the next election cycle.

News reports in the past described McNamara's problems with alcohol in the past. Was alcohol a problem at the SWAT Christmas party? Oh, wait; we all know that deputies don't drink and drive. They don't, do they? OK, you can stop laughing now.

It's too bad that McHenry County doesn't have a newspaper with a really good investigative reporter!
Posted by Gus at 4:42 PM 4 comments:

Let me tell you about Richland County S.C. Sheriff Leon Lott. Here's a guy who "gets it".

I haven't met Sheriff Lott yet, but I can tell you already that he is a far cry from what McHenry County had seated in the soft chair at 2200 N. Seminary Ave. in Woodstock for too many years.

Sheriff Lott is a no-nonsense guy - with a sense of honor, dignity and humor.

Just last week he fired a deputy who stole a very minor object from the garage of a person to whose home he had gone on a call. What did he steal? A short piece of tape, possibly double-sided sticky tape. I don't remember exactly what the description was.

Another deputy saw what was happening and told the errant deputy not to take it. "Don't do it." But the deputy did, and the second deputy turned him in.

We can guess how this would have been handled at MCSD. I don't know how it would be handled by Sheriff Prim. Would he take the hard line, as did Sheriff Lott, that there is NO room in a sheriff's department for a thief?

For Sheriff Lott, the value of the item stolen had no bearing on his decision. Sheriff Lott was not bashful about calling the deputy a thief.

I mentioned Sheriff Lott's sense of humor. About a month ago he had been in his office, monitoring efforts of deputies to catch a daytime burglar. He wanted to attend his daughter's soccer game, and he apparently said aloud that he ought to just go out there and catch the guy, so he could get to his daughter's game on time. As he was driving to the game, his wife spotted the suspect, and Sheriff Lott stopped his vehicle, jumped out and ran the guy down! He is definitely a hands-on Sheriff, and the Columbia, S.C. area is all the better for it.
Posted by Gus at 10:15 AM No comments: