Guns on school grounds? Why not?

Members of WisconsinCarry.com and others are trying to bring common sense to the State of Wisconsin, in the form of un-criminalizing the driving onto school grounds with your firearm while you are dropping off or picking up your children.

From what I understand, Federal law allows that.

I just got word that gun rights extremists have launched a full court press on the Legislature, pushing lawmakers to throw open our school gounds to people carrying hidden, loaded guns.

It's beyond reckless. Wisconsin schools should be a safe haven for our kids, not somewhere they're exposed to the lethal threat of loaded firearms on a daily basis.

WAVE is mobilizing an immediate counter-campaign -- and we urgently need your help to compel our lawmakers to keep our schools safe.

Send an urgent message telling your lawmakers to reject any bill that exposes our kids to loaded, hidden guns on school grounds.

Let's stop this in its tracks.

Thanks,
Jeri
Just read the irrational, emotionally-charged and untrue rhetoric. Is Jeri an idiot?

I'd love to have a face-to-face discussion with Jeri, but trying to have a reasonable conversation with her would probably be like trying to negotiate with a drunk.

Sound off and let Jeri know how you feel. Would Jeri really like campuses to be wide-open to the next Adam Lanza? Wouldn't she really want kids to have half a chance of being protected by a law-abiding citizen with a license/permit to carry a concealed and loaded handgun?

Giuliani is wrong about Obama

And then he (wimped out and) said he wasn't questioning Obama's patriotism.

That is where Giuliani is wrong. He is wrong not to question Obama's patriotism!

When Obama speaks, he has no force. There is nothing to inspire confidence. Watch his gestures, Listen to his words. Listen to the tone of his voice. Watch how he points, when he tries to emphasize something.He is basically a weak man but in a very powerful position as POTUS. He can't even utter a coherent sentence without (or even with) his teleprompter.

His lack of strength does not bode well for the USA.
Posted by Gus at 10:54 AM 2 comments: 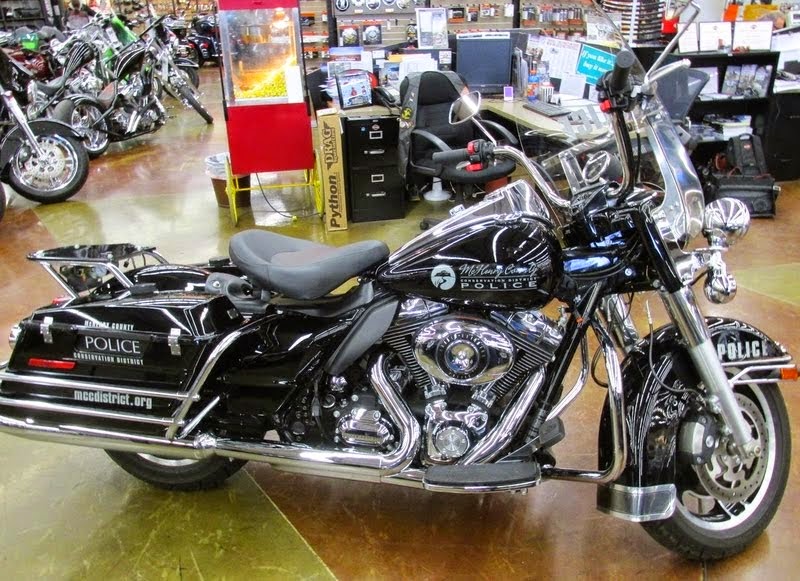 Check out this beautiful, low-mileage (VERY low) Harley-Davidson motorcycle for sale at the Woodstock Harley dealership.

I left the photo large, so that you can easily read "McHenry County Conservation District" on it.

Remember ... your tax dollars are working hard for you in McHenry County.

If you believe that, call me right away. I still have that bridge in New York City that I'm trying to sell.
Posted by Gus at 1:06 PM No comments:

This tip just in from a friend. Sounds like a plan to me!
Due to the high monthly cost, I have torn out my home security system and have also resigned from the Neighborhood Watch Program and cancelled my Home Insurance.
I have installed a Syrian flag on my front porch, an Iranian flag next to my flower bed and the black flag of ISIS waves from my roof-top.
The state police, city police, sheriff, FBI, CIA and Homeland Security are all now watching my house 24/7 at no monthly cost!!
Posted by Gus at 4:43 PM 1 comment:

What is "(inter)net neutrality" all about?

What if the big providers collar even more of the market and start reaching into your pocket more every month?

It'll help you to understand the problem.

Many thanks to the reader in McHenry County who sent this to me.
Posted by Gus at 9:23 PM No comments:

Below is a well-written email that I received from an out-of-town reader. It's too easy for many to overlook the importance of taking action immediately. Now is that time.

You know the old saying - once the horse is gone, it's too late to close the gate.

Read this message and then contact your U.S. Senators and U.S. Representative today! Go to www.fcc.gov  Near the top, click on "Take Action". Click on "Comment". Click on Proceeding 14-28. It's pretty embarrassing that only 2,234 comments have been filed in the past 30 days!

"I DO NOT WANT MORE GOVERNMENT INTERVENTION. If you agree, please add your comments to the FCC site. The Constitution provides for 3 branches of government, not four. Administrative agencies investigate, make their own rules and then enforce their rules. Thus, agencies, such as the EPA and the FCC can destroy individuals and their rights.

"I am against Tom Wheeler's net neutrality's proposal. The internet is working perfectly fine as it is. I do not want the government to regulate it. We do not need another gate keeper to our free speech rights. We do not need the government to withhold information, or people to be reluctant to express their views. I want to know what others think. I may not agree with them, but I will know their views.

"Without the internet the we would never have discovered that NBC's Brian Williams lied regarding his experience in Iraq. Already taxes are too high and allowing the FCC to regulate the internet will lead eventually lead to speech controls, extra taxes, (such as the phone taxes, that never were removed). Keep the government out of regulating the internet!

"Also, reign in some of these administrative agencies. Do this by legislation. The legislature created these agencies, you can stop their funding and rein in their abuses."
Posted by Gus at 7:09 AM 1 comment:

I would like to extend an invitation to Sheriff Bill Prim and the new top echelon at the McHenry County Sheriff's Department.

You are invited to correct what may be one of the greatest errors ever made by a sheriff's department. Sheriff Prim has the authority to re-open this closed case and to see that a full and proper investigation is conducted. Previous key players are now out of the picture - Nygren, Zinke, Pyle. Why is Pyle's name even mentioned? He apparently shut down Detectives Popovits and Muldonado, when Doran Bloom's parents were trying to get answers.

In a display of amazing authority and investigative expertise (not!), by 1:00PM the next day the case was solved and, for all practical purposes, closed.

At 12:30pm on June 8, 2011, an MCSD detective interviewed Scott at the hospital. Well, let's say that "interviewed" is a very loose term in this instance. When you read the transcript (and I have), you quickly see the obvious. The detective led Scott through what happened, instead of probing for a complete story. The detective must have telephoned the Sheriff's Department with a verbal report on which Sheriff Nygren based his remarks to a closed press conference a few minutes later.

I say "closed", because Nygren locked out Cal Skinner (McHenry County Blog), Pete Gonigam (FirstElectricNewspaper.com) and me by limiting admittance to "credentialed" press.

Nygren and Zinke apparently spent only 15 minutes at the crime scene, according to the Crime Scene Log. And there is a question in my mind as to whether Nygren was even there at all, because I was told the next day that Nygren was out of town and flying back for the press conference, which was postponed from 11:00am to 1:00pm.

There was never any lab work on blood platters or any attempted matching of blood on clothing, walls or floor.

Not all the bullets were ever accounted for. The shell casings found at the scene, from Scott's pistol, exceeded the number of bullets recovered.

There was an irregularity in the Coroner's Inquests. Even though Doran Bloom died in McHenry County, his inquest was held in Winnebago County at the same time as Audrey Feldkamp's. And the Coroner's panel was given the cases two hours prior to the announced starting time and inclusion of the public. They only met in public long enough to announce their decisions. The only members of the public present were Mr. and Mrs. Bloom, Sarah Sutschek (now, Strzalka) (Northwest Herald reporter) and I.

Several police professionals outside MCSD told me that the "investigation" was the worst example of police work they had ever seen.

Will Sheriff Prim re-open this case and conduct a thorough, professional investigation? It's probably too late to call in MIAT. At this point, they would just punch holes in what was done and how it was done.

Why should the case be re-opened? Because nobody thinks it happened the way the story was told.
Posted by Gus at 7:44 AM 5 comments:

Gas Price - how much is tax?

Check out this year-old article and map from ExxonMobil about gas prices. While you're at it, think about the price of gas a year ago - and now.

Now look at the ExxonMobil gas price map. Taxes are per gallon, not a percentage of the price. So, if Federal, State and Local taxes in Illinois average 57.50¢/gallon in Illinois, the difference is what you are paying for the gas itself, including delivery to your gas station.

By the way, yesterday there was a 10¢/gal. spread in gas prices right in Woodstock. Use the GasBuddy website and app to find the best price on gas. And don't forget to be a good shopper and also post the prices that you see.
Posted by Gus at 7:53 AM No comments: