Back in 2013 I finished a book that I had been writing about my hypnotherapy experiences, both as a practitioner and as a hypnotized person. I had worked on it off-and-on for years and, finally, I committed to finishing it - and did. The Healing Power of Hypnotherapy is available through Amazon.com as a Kindle book.

I know how I finished it - I committed to it.

And now I am committing to a second book. This one will be about my customer-service days at the Sears, Roebuck and Co. headquarters in Hoffman Estates. I've already got the title - Unthaw It.

During my almost-five years at the "glass palace" on Higgins Road, I had a variety of jobs. Most Sears employees had only two-three jobs in 30 years' employment. I was lucky and moved around a lot.

Dealing directly with retail customers was not supposed to be my job. But a very special part of it was handling complaints that made it through all the filters to "B-6", where the senior executives lived. That's when I got some of them, along with the request that I handle them personally and not farm them out to one of the off-site customer service centers.

I'd better hurry on this book. Sears may not be around much longer.
Posted by Gus at 8:17 AM 5 comments:

Rahm gets nailed by BGA

You'll want to read the Chicago Tribune's article today about the Better Government Association (BGA) lawsuit against Rahm Emanuel and his use of his personal email account to handle City of Chiago official business.

The BGA went after Rahm and had to haul him into court to force him to admit what I will call an improper use of a personal email account for official government business. Now the BGA will get its hands on 2,700 emails that hadn't been available previously.

Did Rahm get his email handling skills from Hillary? Y' think?

Why is this important in Woodstock or McHenry County?

If I sent an email to a City Councilman at his official City of Woodstock email address, I later received a reply from his personal email account. This happened more than once and with more than one Councilman.

I raised this question with the Illinois Attorney General's Public Access Counselor (PAC), because I was concerned about the Illinois Open Records Act and whether his personal email would be available under a FOIA request. The PAC's reply was that it "would be better" for him to reply from the official City email address.

Even though I approached the City of Woodstock about this, nothing changed.

Watch this, the next time you email the Mayor or a City Councilman at his official City email address. When you receive your reply, note from what email address it is coming.

If it comes to you from a personal email address, do you wonder if that reply would be found and included upon a FOIA request?
Posted by Gus at 8:46 AM No comments:

Every poor person (black, white, brown, red, yellow) ought to slam her words and jam them down Oprah's throat. Michelle and family have been sucking on the Federal teat for eight years, flying around the world on vacations largely funded by taxpayer dollars. And she says she feels "no hope"?

Maybe she ought to put on some old clothes (she could borrow them or run down to Goodwill) and walk around Harlem or the south side of Chicago or southeast Washington, D.C. (without bodyguards, of course) and talk to some people who know what "no hope" really means.

Why is she even getting any air time? Oh, I know. The liberal media just loves her.

What was the net worth of the Obamas eight years ago? And what is it today?

Remember Hillary's comment about leaving the White House broke? Yeah, sure... And what are the Clintons worth today?

Here's what Michelle can have no hope about. She'll have to give up her free rides on Air Force One.
Posted by Gus at 9:15 AM 1 comment: 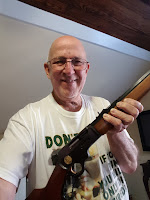 If you are an Electoral College elector and are being threatened or intimidated to change your vote from Trump to Clinton, I will protect your family and you. Get in touch with me now.

And I know others who will do so.

If you receive a threatening phone call, immediately hang up. Don't listen to any of it. Report it to your local police department and to the FBI. Retain any voicemail messages for the police and the FBI.

If you receive threatening mail, report it to your local police department. to the U.S. Postal Service, and to the FBI.

If you receive threatening email, report it to your police department and to the FBI.

If anyone approaches you and speaks so as to threaten you, get the police involved immediately. Do not wait!

And get loud about it.

I am sick and tired of the crybabies who won't accept that they lost. Clinton lost. The crybabies, the mobs, the losers are not going to control this country.
Posted by Gus at 10:42 PM 1 comment:

Is Michael Moore a domestic terrorist?

Now he is marshaling people to disrupt the inauguration ceremony of Donald Trump on January 20, 2017.

Is he really suggesting to "disrupt"? That is, to create an event of violence at the ceremony?

If he is suggesting anything other than a peaceful, orderly assembly of people (a Constitutional right), then Moore should be arrested.

Frankly, just looking at him, I think he should be arrested.

On his website he pitches that "It must be made clear to the whole world that the vast majority of people in the United States do not support his presidency or consent to his rule." What "vast majority" is he talking about?

So Moore is every bit as much as liar as Hillary ("I was under attack on the tarmac") Clinton.

When you look at the U.S. Flag today, honor and remember those who lost their lives 75 years ago,

And learn why Japan did not invade the U.S. Mainland after striking at Pearl Harbor.

Japan could have sent its troop ships and carriers directly to California. Apparently, the prediction of the U.S. military's chief of staff was that we would not have been able to stop a massive invasion before it reached the Mississippi River.

After the war, Japanese generals and admirals were asked that question. Their answer ... they knew that almost every home in America had guns and the Americans knew how to use them!

We must keep this in mind. This is one important reason that we are free.

Source: www.treeofliberty.com
Posted by Gus at 5:44 AM 2 comments: