I am incensed by the words of Baltimore Mayor Stephanie Rawlings-Blake, City Councilman Carl Stokes and Rev. Jamal Bryant. How in the world did they get so stupid?

So incensed that I do not feel that I can write freely to describe my utter contempt and disgust for them.

THE RIOTERS IN BALTIMORE ARE THUGS.
Posted by Gus at 7:24 PM 1 comment:

Remember these words, as they are likely to disappear from media records.

Said Baltimore mayor Stephanie Rawlings-Blake: "We also gave those who wished to destroy, space to do that as well." And then she tried to lie her way out of it, claiming her words were twisted.

I'll tell you how to stop the riots in Baltimore. You give the police power to put down the protestors. They are not peaceful. They are criminals. You reclaim one block at a time and secure it. Corner the thugs and lock them up.

And the law-abiding People of Baltimore need to arm themselves and protect their lives and property.

The spineless mayor should order the police to put a stop to the riots. Instead, she "gave space" to those who wanted to destroy.

She must have taken an Oath of Office. I have submitted a FOIA Request to the City of Baltimore for that Oath. Should she be impeached and immediately removed from office? Her own words are proof of her not being fit to serve as mayor.

What if those conditions came to Woodstock? to Crystal Lake? to the Huntley Mall? to Green Street in McHenry?

Are you ready to defend your home? your business? your schools? your lives?

Would your mayor be wimpy about the "rights" of violent protestors?
Posted by Gus at 6:58 AM 1 comment:

Flashlight app on your phone?


Watch this October 2014 alert about flashlight apps on SmartPhones.

Then you can lose a lot of sleep or head over to your cell phone provider's store and take action to protect yourself.

Do you use your phone for banking? Credit card payments? Just checking a balance on your credit card or checking account?

Will you stand up for Jimbo's?

A fundraiser is in progress for Jim Boggess, owner of the former Jimbo's Deli in Flemington, New Jersey. This business closed after racists and bigots grabbed enormous publicity in social media and other reporting agencies.

One black business neighbor went to local police and complained the the window sign proclaiming March as White History Month was "racist". Even hear of anything so stupid?

But the adverse publicity drove Jimbo's out of business in a month's time.

Who knows? Maybe tables will turn on Curtis, and karma will turn around and bite him right in his fitness business. 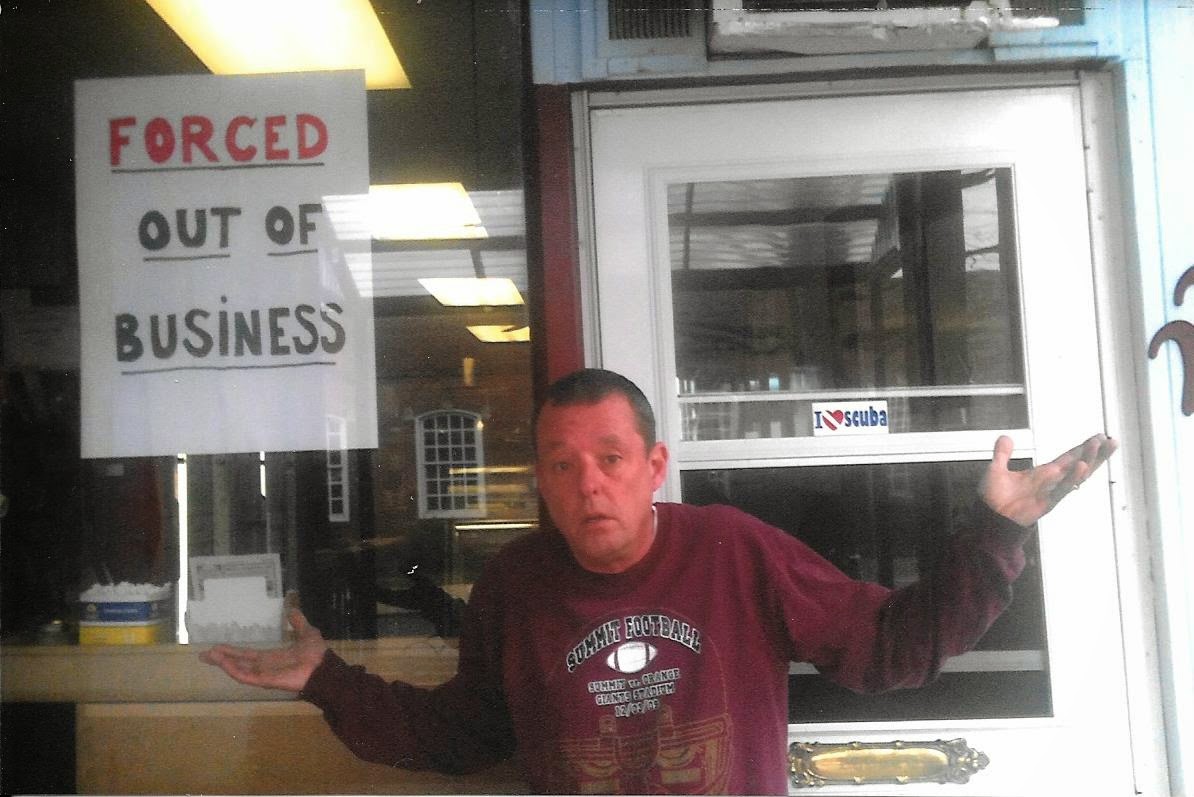 The racists and the bigots showed up in strength, and in a month Jimbo's was out of business! According to one media article, one particular neighbor, Bhakti Curtis, complained to police that Jimbo's window sign proclaiming March as White History Month was "racist". His complaint went nowhere with local police. Click on the link to view the lehighvalleylive.com article and the photo of Jimbo's window sign.

But the story went nationwide. Negative comments about Jimbo's were published on Yelp.com, probably by people who had never eaten there.

I mailed a message of support to Jimbo, and yesterday I received a letter and photo (above) from him that he had been forced to close his business.

Will karma strike Curtis? According to his Facebook page, he is the owner of Bhakti Fitness in
Flemington. No address is easily found on the internet, and Curtis' own website doesn't even provide an address. When February 2016 rolls around and the U.S. "celebrates" Black History Month, maybe the same racists and bigots will show up in front of Bhakti Fitness.

Recently I wrote about the power of social media to destroy businesses and people. Here is another example.

The sweetest revenge for Jimbo will be his success in his next business. He should write a book immediately and get on the speaking trail - about how goofballs can so quickly destroy an honest businessman via social media.

I recall being offended by Black History Month, when I was employed at the Sears, Roebuck and Co. headquarters in Hoffman Estates in the late 1990s. Sears had many "diversity" groups and, in addition to February's BHM, it devoted a month to the LGBT community with display of artwork by Sears employees who was members of the LGBT club there. After overhearing complaints by employees who were afraid to speak out, I went to diversity manager (who happened to be black).

"Can we have a White History Month?" I asked.

There was no way that Sears was going to stick its corporate head up out of that foxhole!
Posted by Gus at 7:43 AM 4 comments:

Who wants to go to Walkerton, Indiana and party at Memories Pizza?

This pizza "joint" has been in the news because of a comment that a co-owner made to a reporter. What is getting lost in the news is that she, the co-owner, did not say that they had refused to cater pizza to a wedding of a gay couple, but that they would refuse, if asked. What is also lost in the frenzy is that a gay person would be served in their restaurant.

The media feeding frenzy has brought the worms out of the woodwork. One woman, Jessica Dooley of Goshen, Ind., reportedly threatened to go to Walkerton and burn down that business. Read the story containing that threat here.

This is a great example of how the internet hurts business and people. Stories go around the world as fast as people can type, and then people say things for which it is hard to hold them accountable. I hope that Jessica is charged, prosecuted, found guilty and sent to jail for five years.

If I were closer, I'd be right there in Walkerton, ready to defend the owners and their business. How about you?
Posted by Gus at 6:11 PM 4 comments: