Why can't Joe Biden run for Democratic nominee for POTUS?

He has a job. He draws a salary from the U.S. Government. He has Government-paid bodyguards.

If Biden throws his hat in the ring, he is snubbing hundreds of thousands of hard-working Americans who pay taxes to support the U.S. Government. Why should WE pay for his security and his salary and benefits, while he is out traipsing around the country?

If he had an honest bone in his body, he would resign as VPOTUS and then announce that he will run. 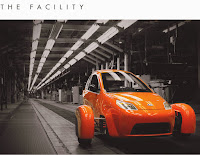 Elio....  what will this do to the future of automobiles?

Check out the Elio, which is not yet being made.

How often are you the sole occupant of your vehicle? How often do you drive with only one passenger and no need for luggage space?

What will this do to the Big 3? Will one of them buy Elio, just to keep it off the market?
Posted by Gus at 12:35 PM No comments:

The comment doesn't deserve to get hidden where it would probably never be read, so ...

Check out the Facebook page called "Justice from Bull Valley Police Department". Retain the spacing shown; don't run all the words together.

And check out the video of a recent meeting in Bull Valley. I haven't watched it all the way through. If it is of interest to you, you can watch all of it. It was posted to the Facebook page on October 3, 2015.
At the beginning, it seems to me that the woman at the front left is clearly uncomfortable with the recording being made of the meeting.

I remember hearing stories of drivers getting stopped for 2-3MPH over the posted speed limit. A former police chief told me his officers never stopped anyone for less than 10MPH over the limit. It was all I could do to keep from laughing.

What has your own experience been with Bull Valley Police? Most local McHenry County residents know to obey traffic laws exactly in Bull Valley. Actually, that's not a bad idea. But is Bull Valley PD's enforcement too aggressive? Is the vehicle impoundment law being properly applied?

Has traffic enforcement changed at all in the past 3-4 years?
Posted by Gus at 8:29 PM 4 comments:

The New York Times published an incredible and soppy story yesterday about Obama's remarks after the college shooting in Roseburg, Oregon.

Obama is so wrong on so many points! He makes me want to throw up!

The only thing honest he said was that he is "powerless". Finally! A truthful word from him.

The people should get the government to change gun laws? Baloney! There are plenty of good laws in place. Just enforce them.

If he doesn't want to be so angry, then stay away from the podium. It is not a national problem when some punk shoots some people.

I haven't heard him say anything about the white police officer, Greg Alia, gunned down in Forest Acres, S.C. on September 30th, three blocks from my office. The 32-year-old officer left a widow and infant son. Will Obama be at the funeral tomorrow? Will he criticize the black scumbag who drew a firearm and shot the officer during a struggle? Was that scumbag a follower of Louis Farrakhan?

What if Umpqua Community College had allowed students, faculty and staff to carry loaded firearms on campus, either concealed or openly? The punk shooter would have been stopped in his tracks. Do you hear Obama pleading with college officials to end gun-free zones on campus?

Remember, Obama and family are well-protected by men and women with guns!

What Obama refuses to "get" is that we already have common-sense gun laws!

Nothing Obama will do will prevent mass shootings. He won't even close the southern border. Talk about "powerless".
Posted by Gus at 7:25 AM 3 comments:

Newspapers - cutting their own throats?

Are newspapers cutting their own throats?

The public stopped buying papers to wrap the garbage in, as newspapers went digital.

I recall asking John Rung several years ago if the Northwest Herald would ever charge readers of its online edition. His answer was something like, "No way!"

And here we are today. Of course, times do change. But, instead of teasing readers and "selling" them value in order to attract their $10/month, the Northwest Herald will let you see a headline and then sometimes ask you a couple of questions, telling you to answer the questions to continue reading, and then spring the nasty "Pay now or else" page on you.

I contend that newspapers only irritate readers and drive them farther away. And toward other media. And soon newspapers will be gone forever. At least, the Chicago Tribune is brave enough to flag "Pay-to-read" articles with the little blue digital symbol.

The Northwest Herald would like me to pay for its digital edition; so would the Chicago Tribune. So would The State, in Columbia, S.C. So would other newspapers that I occasionally glance at. I am NOT going to pay $10/mo. to read each one. Do newspaper owners ever stop to think for even a minute about how they are driving readers away?

How did they all decide on $9-10/month? Price-fixing? Are digital newspaper costs the same, all over the country. I don't think so.
Posted by Gus at 6:30 AM No comments: