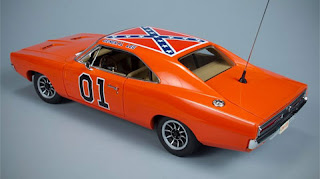 The Confederate Battle Flag (CBF) is about to be stripped from "the General".

Isn't the knee-jerk reaction in America totally stupid? How do we get it stopped? Some jerk kid in South Carolina wreaks mayhem and murder in a church because he doesn't like blacks, and now the whole country is going crazy.

I don't think I had ever noticed the CBF on top of the Charger, and I probably watched more than my share of Dukes of Hazzard episodes.

I am incensed that that jerk went into a church and killed nine people. I would be just as incensed, had they been white or yellow or brown. Let justice be swift and not wait through 15 years of appeals. It would be okay with me if the trial started Monday, ended Tuesday, and his execution was on Wednesday.

One of my co-workers today let me know, loudly and clearly, that she was not going to engage in any discussion about "the Confederate flag". She said it needed to come down 20 years ago. Well, I don't agree that it belongs only in a museum.

It certainly makes me curious what is being taught in all schools about the Civil War and just what students are being taught about the CBF.
Posted by Gus at 7:08 PM No comments:

If busloads of terrorists were headed for your town, what would you do? Sit tight at home, but ready to defend your homestead and family if your property is breached?

Or would you go into town to protect public and private property that the terrorists are prepared to destroy?

Perhaps fueled by the Baltimore mayor's statement (Let them destroy), there is rumor that busloads of agitators are bound from the deep South for Charleston for a Saturday night melee. True? Just a rumor?

Should civilians arm themselves and patrol the downtown streets of Charleston, helping police where needed and filling in when police are busy elsewhere?

Will Emanuel AME Church be a target?

I was enjoying Father's Day, and then I checked my email.

What was there? A Father's Day message from Rep. Bobby Rush, a tired, old man still sucking on the government teat! Of all the stupid things. I had never added my email address to any list at this office, but I had written to his office one time more than a year ago. I think it was after he fell asleep about 2:00PM at a town hall meeting on Chicago's South Side on the concealed-carry issue.

Now I'll find out if if office honors the "unsubscribe" request. That voters would keep Bobby Rush in office sends the world a very clear message, doesn't it?

Have you received an email message about unpaid tolls on your E-ZPass? If so, this warning on the Illinois Tollway website might be of interest. Click here.

If you only travel in Illinois, you'll recognize right away that your I-Pass is not the same as E-ZPass. But, if you have traveled in eastern states and found that your I-Pass works where E-ZPass is set up, then you may wonder if you owe money.

Check the balance in your Illinois Tollway account directly.

Obama said today, following last night's shooting in a church in Charleston, S.C. - "Once again, innocent people were killed in part because someone who wanted to inflict harm had no trouble getting their hands on a gun."

Roof had no trouble getting his hands on a gun because his father had given it to him for his 21st birthday in April.

I have THIS to say to and about Obama ...

Edited 6/20/15: Later news reports indicate that the father gave his son money for his 21st birthday, not the gun.
Posted by Gus at 6:40 PM 1 comment:

I awakened this morning to news of a shooting in Charleston, S.C. yesterday about 9:00PM. Claims are that a white shooter fired and killed nine in the historic Emanuel AME Church, including its minister, S.C. State Senator Clementa Pinckney.

Charleston's mayor rushed to call it a hate crime. My guess, which has to be as good as his, is that the shooter was mad at Sen. Pinckney over gun control, but I can't easily and quickly find Sen. Pinckney's position on gun control.

In South Carolina a concealed-carry permittee can carry inside a church, IF he has the express authority of the person in charge. Would Sen./Rev. Pinckney have granted permission?

Ask your minister this Sunday if you, as a concealed-carry license or permit holder, can carry in his church. Then get it in writing, if he says you can. And then do! Otherwise, you are just another sitting duck, as the nine were in Charleston last night.

Looks might I might have been wrong about the reason that the shooter went to the Charleston church last night.

The following message has been sent to S.C. Gov. Haley:
"Dear Gov. Haley,
I moved to S.C. in April 2014. One of the first things I did was obtain my concealed-carry permit. In view of the Charleston church shooting, I ask that you take the initiative to remove churches as gun-free zones and allow permitted parishioners to carry concealed weapons in churches without having to get the consent of the person in charge.
My guess is that State Sen. Pinckney and his Board never would have allowed it. An armed person might have stopped Roof before he could shoot and kill nine people.
I shall appreciate hearing form you whether you will support lawful carrying of concealed firearms in churches.
Sincerely,
Gus Philpott

Did you know this about the NAACP?

Rachel Dolezal has upset an apple cart in Spokane, Wash. Like, who cares?

Rachel, white at birth, has decided she is black. Is this like becoming a Christian? Or a Muslim? Or an atheist? Or moving to another town? Can you just decide on your race? Or maybe like Bruce. Does saying so make it so?

All the so-called "news" is elsewhere for your enjoyment (or disgust).

Here's something to test your acceptance of "truth". From CNN.com comes this: "...regional (NAACP) President Gerald Hankerson ... called the NAACP a civil rights organization first that includes 'leaders from all different ethnicities,' adding that it 'doesn't do a genealogy search on what a person's ethnicity is when they' take a top position."

Why do I think that the NAACP doesn't want whitey at the helm?

Do you think that Cornell Brooks agrees with Hankerson? He's the president and CEO of the NAACP.

And what is the NAACP? It's the National Association for the Advancement of Colored People. That's what blacks were called in the U.S. "Black." Then Negroes. Then African-American. What will it be next?

So, if you are colored "white", are you black? Maybe in Rachel's mind. Hey, here's an idea for a new TV series - White is the New Black, starring Rachel Dolezal.


On her own initiative and apparently without consent of the Board of the Spokane chapter of the NAACP, Rachel canceled tonight's chapter meeting. Dolezal was to explain the accusations against her.

Also from CNN.com, "After the meeting was postponed, the head of the chapter's executive committee criticized the decision. 'I don't see any language in the by-laws that empowers you, or any one member, to arbitrarily cancel/postpone tomorrow's meeting,' Lawrence Burnley said in a letter to Dolezal."

Maybe the chapter will have the guts to hold its meeting as scheduled. Hop on it, Mr. Burnley. Get word out this morning that the chapter meeting will be held as scheduled. Surely, you can appoint a president pro tem.
Posted by Gus at 6:29 AM No comments:

This morning I went to the V.A. hospital in Columbia, S.C. for a routine blood draw. The lab was not operating, and about 40-50 people were waiting (like sheep) for the "system" to come back up. All that the employees would say was that the system was "down" and they couldn't read lab orders.

I waited ten minutes and left. On the way back home CNN radio carried a report about hacking of the Army records yesterday (not the 4,000,000 records reported hacked last week, allegedly by China). CNN.com doesn't not have any news about this, and the Chicago Tribune is silent.

If you don't talk about something, does that mean it's not happening?

All this caused me to wonder about records redundancy and what happens in a major hospital when "systems" go down. If a patient needs medication but nurses can't read a chart and obtain an order, will the patient just die?

Usually there are only 7-8 people waiting at 7:00AM, so I knew something was up when I walked in. The lab employees at the Dorn V.A. Medical Center are great; sometimes, they will come into the lobby to collect the next person, instead of waiting for his number to be announced. But today, without the "system", there was nothing they could do.

Just how vulnerable are we in the U.S. to hacking?
Posted by Gus at 7:02 AM 2 comments:

Can you ride a bike?

You probably know how to ride a bicycle; right?

And, if you do know, have you ever said, "Once you know how to ride a bike, you never forget"?

Watch this with Justin Sandlin as he attempts to ride a bike that is just a little different.

What if you got on a bike tomorrow and couldn't ride it? Think that could happen? Watch this video. It's worth your eight minutes today.
Posted by Gus at 7:40 AM 1 comment:

Either the Baltimore mayor doesn't know what a FOIA request is or she thinks she is above Maryland law or she hasn't hired competent staff or (_____fill in the blank___).

On about April 28, I submitted a FOIA request for the official Oath of Office. I wanted to understand how she could give an order to allow the thugs to destroy her city.

I wonder who prosecutes such a failure to obey Maryland law? Anybody? (probably not)

Here what I sent as a follow-up today.

"More than 30 days ago, on about April 28, 2015, I submitted a Freedom of Information Request to your office for the Oath of Office of the Mayor of the City of Baltimore. I received an acknowledgement from your office.
"However, I have not received your reply or further communication. Please send me a copy of my original request by return email.
"The Maryland Public Information Act §10-611 et seq. required you to respond within 30 days. As of this date, you failed to do so.
"Please respond to my FOIA Request without further delay."
Posted by Gus at 4:38 PM 2 comments:

Check out The Woodstock Independent for the article about Woodstock resident and former businessman, 91-yaer-old Walter Thomas, who backed a car through his garage door.

It was something he always wanted to do, and he did it. With the help of District 200 driver's ed teacher Becky Goers (his granddaughter) and MCSD Deputy Andrew Thomas (Becky's brother), Walter Thomas checked an item off his bucket list.

See his photo on TWI's Facebook page at https://www.facebook.com/thewoodstockindependent?_rdr