The media are now reporting how the false alert of an incoming missile was sent out on Saturday in Hawaii.

I have written to EMA Director Miyagi and Gov. Ige, as follows:


"By now, you must be asking yourself who the idiot was who designed the steps in the alert system.

First, the "Are you sure you want to do this?" prompt is insufficient. The worker probably saw that at the end of every shift for the system test and didn't bother to re-check what he was saying "Yes" to.

The wording should have read, "Are you sure that you want to send out an EMERGENCY ALERT?" and on a different color screen with emphatic, contrasting lettering.

Perhaps a second employee's verification should be required.

Secondly, for a real alert there there should be a second prompt, "Are you REALLY sure that you want to send an EMERGENCY ALERT?

A copy of this message is being sent to Gov. Ige."

What would you have done, had you been in Hawaii on Saturday morning? Would you have been concerned? Worried? Fatalistic?

Would you have gone out on the balcony to watch the arrival of a missile? Headed for the basement, interior stairway or closet? Or maybe just fried up a couple of extra slices of bacon for a good, even if last, breakfast?

Do you have any constructive criticism for Hawaii or, for that fact, Illinois or the city or town in which you live? Email information can be found at Hawaii.gov

This could be a good time to review the legal state of your personal and business affairs. Is your Will up-to-date? Is the beneficiary designation of each of your life insurance policies just the way you want it? Are your bank accounts correctly titled?

Don't be like one prominent Woodstock family who assured me that their lawyer had "taken care of everything." They had Wills and a Trust of many pages. All well done. What was the problem? The attorney never informed them that the bank named as Trustee had closed its trust department 15 years before. And no successor Trustee was named.

Instead of a $5,000 legal bill to wind up everything, the attorney's final bill was about $60,000. It started with a trip to the courthouse to get a new bank trustee appointed. The employee at the small bank was not experienced. Every time one of the many adult children/heirs called him with a question, he referred them to the attorney. Ka-ching, ka-ching. And it ended with the attorney's being late in filing the Federal Estate Tax Return. Ka-ching. Ka-ching.
Posted by Gus at 8:01 AM 2 comments: 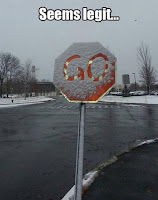 I was reminded today by this photograph of a conversation I had a number of years ago with a police official in Woodstock.

I had been stopped one day for turning left from East Todd Ave. into Highway 47. I made my left turn and stopped in the two-way, left-turn lane because of heavy northbound traffic. The first car stopped and let me pull over into the northbound lane. Then the overhead flashing lights came on, and I pulled over into a church parking lot.

I knew that I had properly used the lane, and I knew that Woodstock PD had been writing many tickets for violations over the years. And many would have been violations, because drivers too often use the center two-way, left-turn lane as a driving lane, and not just for turns. But I suspected some tickets were not correct.

The officer accepted my explanation, after I showed him the Illinois Rules of the Road, where it stated expressly that a turn could be made into the two-way, left-turn lane. I recall his honest comment that he had been an officer for many years and hadn't known that. He issued a Warning, instead of a citation.

I asked the City of Woodstock for a legal opinion, and the first letter back from the outside law firm had about five paragraphs. The first four paragraghs said my turn was legal, and the fifth, concluding paragraph said, "Therefore, the turn was illegal" (or words to that effect). So I asked the then-City Manager to get another opinion from the City's outside law firm. The second letter confirmed that my turn had not been unlawful.

I felt the training at the Woodstock PD was in error and met with a police official.

We were discussing two-way left-turn lanes, and he insisted that it was illegal to make a left turn from a driveway or side street into a two-way, left-turn lane, such as on Highway 47 (N. Seminary) north of McHenry Avenue. He said that the arrows painted on the roadway surface and the signs on the side of the road only indicated turns out of the lane, not into it. I explained that the roadway marking and signs on the shoulder were "traffic control devices" and that you had to read the statute to learn what the law said.

Then I asked him if he would come across a Stop sign on his way home that night. He said he would. "Do you have a cell phone?" Yes, he said. "After you stop, you'll have to call your wife and tell her you won't be home for dinner, because nowhere on that Stop sign does it say 'Go'."

Just in case you are thinking that I have a smart answer for everything, I don't. The officer had to issue me a Warning, because he had stopped me - even though I had, in fact, not violated the law. That's why I complained higher up. The officer was polite, respectful, professional and courteous. No complaints there. And he was just following orders, even though the orders were wrong.

I later received an email from WPD that officers would no longer be writing tickets to drivers who made a left turn into a two-way, left-turn lane. The driver, of course, has to stop or safely and quickly move over into the traffic lane.
Posted by Gus at 2:18 PM No comments: