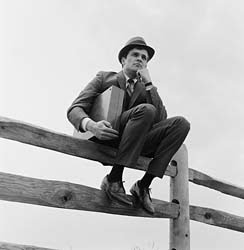 Sometimes you can't just sit on the fence, scratching your head. Or stick your head in the sand and hope no one notices.

Where does the Sheriff of Nottingham (err, McHenry County) "sit" on the efforts being made in Washington, D.C. and Springfield, Ill. to strip law-abiding gun owners of their constitutional rights?

This question must be addressed not only to Keith Nygren, but also to Andy Zinke. Nygren doesn't seem to be around much. Maybe he only shows up on payday to collect his monthly $12,500 paycheck. Actually, he doesn't even need to show up for that, so long as he keeps his checking account open to receive his direct deposit.

But, since his name is still on the front door (until December 1, 2014), where does Keith Nygren stand?

Is there anyone in McHenry County who thinks Nygren would stand on the Courthouse steps (figuratively speaking, of course, since there aren't any steps there) and tell the GunGrabber-in-Chief to stay the hell out of McHenry County, if he has any plans to take firearms away from law-abiding citizens? Would Nygren wave the U.S. Constitution at him and tell Obama, "Don't even think about it!"?

Or, since Seldom Seen Nygren is nowhere to be seen, would Zinke stand out there and make the same strong statement?

The latest sheriff to be in the news is Sheriff Shayne Heap of the Elbert County (Colo.) Sheriff's Office. Check out this article about him. He says, “To make laws that are constitutionally questionable and punitive to law abiding citizens, who’ve done nothing wrong, borders on legislative abuse.”


Elbert County is just east of Denver and east of Arapahoe County, where I enjoyed almost eight years as a volunteer in the Arapahoe County Sheriff's Posse - which was a real posse (unlike Nygren's fundraising effort that sold sweatshirts to the public with the embroidered badge of the McHenry County Sheriff's Department on it!).
Posted by Gus at 6:39 AM

Yes, Gus, that is why we elect a sheriff, to rail against the President.

No, Ray. We elect a sheriff to enforce the laws and to obey the laws - like obey the U.S. and Illinois Constitutions.

Four hundred sheriffs in the U.S. have the guts to stand up and threaten the Feds, if the Feds attempt to illegal confiscate firearms from law-abiding citizens.

You've heard of the Second Amendment; right? The President of the U.S. has apparently forgotten it or chosen to disregard it.