The sheriff was busted in a drug case involving a meth lab. We've been reading about drugs busts and meth labs and arrests in drug cases and confiscation of drugs, and now, according to the morning paper, the sheriff got busted, thanks to an informant.
Residents had been a little curious why the county had seemed to be somewhat immune to the effects of the drug business around it, and now they know why. An informant says that the sheriff gave him meth and even snorted it himself. 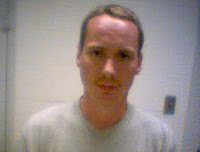 The sheriff has been charged with meth distribution and is sitting in jail with a $250,000 bond. Anyone ready to cough up?
And where is this happening? Van Buren, Missouri! That's in southern Missouri and about 150 miles SSW of St. Louis. Out in the boonies, as they say. Tommy Adams, 31, (maybe about-to-be-former) Sheriff of Carter County, is probably thinking pretty hard about now about "the right to remain silent", while he sits in the clink in the Cape Girardeau County Jail.
Adams had been elected sheriff in 2008 by just one vote (1,424-1,423), after his opponent committed suicide before election day.

Who do you suppose had to get involved, when there was a suspicion that the county sheriff was dirty? The Missouri State Police? (Photo from Cape Girardeau Sheriff's Office)
Posted by Gus at 9:13 AM