Is desperation setting in?

Is desperation setting in? Is the handwriting on the wall?

Why would someone vandalize a large political sign on a tall platform? ClearChannel has been asked to file a police report and to be prepared to prosecute the vandals. No doubt somebody will be bragging about his "bravery" to climb up on that tall platform, and the more he talks, the bigger the chance to nab him/them and trace them back to the origin of their efforts.

Why would people steal yard signs?

Why would people vandalize a sign location by smashing a light fixture in a yard that illuminates one of Zane's yard signs?

Why would people destroy light fixtures on stone columns of a property where Zane's signs are displayed?

Why, don't we know that it's only common vandals who just happen across these signs for one candidate in an important County race? Yeah, sure... 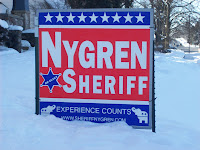 Every time you see a Nygren sign, think Zane.

When Zane and I go head-to-head in the race for November 2, it'll be a good, strong, honest, forthright campaign. But, for now, on February 2, this is Green Party candidate Gus Philpott asking you to vote for Zane Seipler on February 2.
Posted by Gus at 7:01 PM

with all the lowdown dirty politics your friend zane and his malcontents have engaged in I wouldnt be surprised if they damaged their own signs just so they could try and blame the sheriff. Zanes signs have probabaly been removed because a great many are posted in places he has no permission to do so, and illegally along roadways.Once again gus, you speak without having any factual information just like you do everytime your mouth opens

joe, you must be talking about a different zane, because the Zane I know has not engaged in any "lowdown dirty politics" and he has no "malcontents."

Zane and his campaign supporters have been diligent about obtaining permission before posting signs on private property.

I think it's really weird that while driving North on 14 thru Woodstock approaching the courthouse, many houses have BOTH signs in the same yard.

Hockeyman, thanks for your comment. You're right. It's weird.

I guess a possibility is different occupants have different political views.

Probably some other reason(s), too.

Do deputies like "joe" ever actually think anything through?

We all know he's angry and fed up with the whole situation and just wishes Zane would fall off the face of the planet.

IT'S NOT GOING TO HAPPEN! If Zane loses the primary, he's still going to be here.

He's only made himself powerful. Don't they get it. He's known now.

He's exposed stuff that others have complained about for years.

Nygren plays catch up because he's so out of touch.

Zane has stood toe to toe with the most feared man in McHenry County politics and kicked him right in the balls.

Zane will be back as a member of the Sheriff's Department. Nygren can't stop it, no one can.

So to all the people like "joe", the day is coming. Start thinking long term, Nygren won't be here forever.