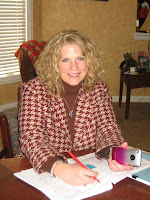 Huntley High School teacher Mary Graft has been notified that she won the USAF's "Distinguished Educator Award" and that she is the only teacher to receive this award in the entire Midwest region.

Mary had been informed that she was nominated for the Award and then received a call to tell her that she had won! Mary will join about 25 other educators from the U.S. to tour two Air Force bases. The group's escort will be a Lt. Colonel. The trip will be during the first week of February, and it ought to be VIP all the way.

In addition, Mary will receive her Masters degree in Educational Leadership on Wednesday at Navy Pier.

I worked with Mary at the Sears, Roebuck & Co. headquarters in Hoffman Estates. She and I were flying back to Chicago on 9/11 from a customer service site visit in San Antonio, and we were lucky enough that our plane was close to Chicago and was allowed to continue and land at O'Hare.

Congratulations, Mary!
Posted by Gus at 9:00 AM